H-SC Ocean Center, LLC is nonprofit because it is wholly owned and controlled by Hampden-Sydney College and therefore is tax exempt.

Hatteras Island Ocean Center, INC is a nonprofit 501(c)(3) community effort made possible with the generous help of our volunteers, contributors, and supporters. Many thanks to all of them. Donations are tax deductible.

During Summer, 2011, Frisco homeowner and Ocean Center Founder, Eric Kaplan, was pondering how to help the community deal with the loss of the Frisco Pier when he learned that Cape Hatteras Secondary School of Coastal Studies lacked robust facilities for teaching advanced placement marine biology. Kaplan considered the possibility of creating a new pier that could be used for both recreation and education.  He approached longtime Frisco resident and Hatteras Island Wildlife Rescue (www.hiwr.us) Founder, Lou Browning, to see what Browning thought of the concept. Browning liked the idea because he thought it would be very good for the community and also because he hoped it would help him extend his wildlife rescue work into the realm of educating the public about the wildlife issues he was constantly experiencing in his work with animals. Kaplan then approached lifetime Hatteras Village resident and President of Midgett Realty, Tim Midgett, seeking further validation of the concept and looking for support from the business community. Midgett was so delighted by the concept that he agreed to join the Ocean Center board and also pledged significant financial and other support from Midgett Realty.

Since Ocean Center Pier was to be located in Cape Hatteras National Seashore, the next step was to meet with the National Park Service (NPS) and see what they thought of the idea. NPS thought it was a terrific idea and, in fact, it was NPS who suggested the location which is now known as Ocean Center Beach Area (OCBA). NPS got to work figuring out the legal framework that would allow them to work with the nonprofit Ocean Center, and Kaplan got to work on all the logistics involved with buying the OCBA property.

While working on the OCBA property purchases, Kaplan noticed that just a short walk away, on the sound side of Highway 12, there were over fifteen acres of coastal wetlands and forest that would be complementary to the ocean side portion of the project. As luck would have it, Browning and his wife Linda owned 4.6 of those acres and decided to donate of the property to the Ocean Center. The Browning donation is the heart of what is now Ocean Center Ecology Park (OCEP). Directly next to the Browning property there was a small shopping center for sale and the decision was made to purchase the shopping center to accelerate the ecology education portion of the project. Beginning in late 2012 planning started on Ocean Center Hall and by late Summer 2013 ecology and history exhibits in Ocean Center Hall were open. Beacon Place was conceived at the 2013 annual Day At The Docks event. It is a year-round “Education Tent” where local and regional nonprofits can connect with the public.

Liz Browning Fox, Jody Haller, and Rich Henneberry contributed countless hours of the their time to help launch the Ocean Center.  Without their hard work, great ideas, and dedication Ocean Center Hall and Beacon Place would never have opened. They also helped recruit other volunteers and worked hard to create awareness of the project.  Many, many thanks to Liz, Jody, and Rich.

Danny Couch: “The Island Historian,” is a lifelong resident of Hatteras Island. He has done extensive oral and written research here for almost four decades, parlaying his considerable knowledge and a raconteur spirit into Hatteras Tours, which promotes the unique maritime history, heritage, culture and tradition of the Outer Banks. Danny is Chairman of the Friends of the Graveyard of the Atlantic Museum, one of North Carolina’s three maritime museums, and a committee member of Flags Over Hatteras.

Joe Thompson: A native of North Carolina, Joe met his wife Tami at University of North Carolina in Chapel Hill, discovered the Outer Banks, and never looked back. He moved to Hatteras Island on his bicycle and after four days and 450 miles, Joe was home. After spending over fifteen years as a builder and developer, building hundreds of houses and many businesses, Joe’s primary focus is now Koru Village and several other Avon destinations that include the Avon Pier and Pangea Tavern.

COVID 19:
The Hatteras Island Ocean Center is now open to the general public.

The Ocean Center is a small space - visitation is limited to small groups. Masks are encouraged.

PROGRAMS:
Our outdoor nature programs will resume in May 2022. Please click our PROGRAMS tab for schedules and costs. 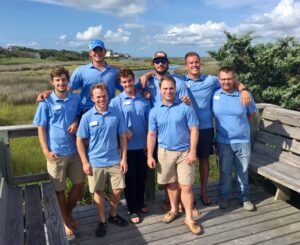